Simon Lewis’ first collection, Jewtown, was a finalist in the Shine/Strong Award in 2017. In 2015 he was the winner of the Hennessey Prize for Emerging Poetry and runner-up in the Patrick Kavanagh Prize. His second collection is Ah, Men!

Ah, Men! is the 2nd poetry collection by Simon Lewis. In these new poems, Lewis considers what it means to be male in 21st century Ireland, reflecting on how the role of the male in Irish society is changing rapidly.

Simon’s debut poetry collection Jewtown was a finalist in the Shine/Strong Award. It chronicles the experiences of Lithuanian Jews who in the late 1880s-90s settled in an area of Cork city that became known as Jewtown.

There are no upcoming events at this time.

Thoughts on the Leaving Cert from a Sheffield United Fan

Football is not a matter of life and death; it’s much more important than that. If you were to listen to the news yesterday, you could replace the word “football” with “The Leaving Cert,” and no one would have disagreed. The Minister for Education announced another change to, what many take as a sadistic rite of passage at the end of secondary education, due to the COVID-19 coronavirus.

Instead of the exam being delayed by 6 weeks or so, and despite the Taoiseach’s assurances that the exam would go ahead by “hook or by crook,” the Minister announced that the results of the Leaving Cert would now be given by predicted grades.

I’m a primary school teacher so why on earth would I have a valid opinion on this. Furthermore this web site focuses on my poetry work, so why would I be wasting precious internet bandwidth on something that almost finished off any love I might have had for poetry? Worse, I am a Sheffield United supporter, so you couldn’t trust my judgment on anything anyway.

I was a Sheffield United fan when I did my Leaving Cert in 1997. It was a particularly painful year. We were in the old First Division (now the much better sounding Championship) and although we came 5th in the league, we reached the Play Off Final against Crystal Palace, where at the very last kick of the game, a guy called David Hopkins, scored the goal to prevent a return to the Premier League. Despite years of pain and hardship, I remain a Blades fan and this season has been a joy. That was, of course, until this pandemic hit.

We have a decent shot at qualifying for European competitions next season. We’re only a couple of points from the Champions’ League. Realistically, most people predict we’ll get into the Europa League, given all the variables.

However, if you cast your mind back to August 2019, almost nobody would have predicted this. Almost every single football journalist, when predicting Sheffield United’s finish in the Premier League for this year, had us rooted to the bottom of the table. Left to simulators and experts, we were to be condemned back to the Championship by Christmas.

You might claim now that this is a barely disguised and a weak metaphor for my opinion on the idea of predicted grades for the Leaving Cert; you’d be correct. At the beginning of 6th year, of school, anything can happen. From Sheffield United’s perspective, they worked their asses off and they had loads of time to prove everyone wrong.

Tell that to Norwich City now.

Norwich City sit in the position where the experts had put Sheffield United, rooted to the bottom of the table. There isn’t a football analyst out there that would predict Norwich will end up anywhere else but in 20th place. However, you speak to any Norwich City player, they know that if they really put in enough effort and up their game a little bit, they could escape relegation. They know that they’re not going to win the league but the likelihood is they’ll put in a huge amount of effort to not get relegated.

West Brom were one such club that by Christmas of 2004, were dead and buried, rooted to the bottom of the Premier League. However, once they started playing in a different way, slowly but surely they managed to start pulling some results together and on the last day of the season, they did just enough to stay up, with, I believe the lowest ever number of points to survive the league. It’s known as the Premier League’s Greatest Escape.

The Leaving Cert being moved to predicted grades is going to suit the Liverpools of the education system – the ones that have been regularly churning out the results, consistently. Maybe, that’s how it should be done. Maybe, the students that have been consistently working the hardest should be rewarded with higher results. However, that isn’t how the Leaving Cert has been measured up until now. It has judged people on their performance at the end of the year.

If you were a Norwich City Leaving Cert candidate, because you haven’t being doing well up until now, it’s unlikely that you’ll do extremely well, but there is more than enough time to knuckle down to do a little better than where you’re at right now. Perhaps, a 17th place finish?

The change on doing the Leaving Cert on the 29th July and switching to a completely different system of assessment will benefit the majority of students. They’ll likely end up with enough to get on to their courses. However, there’s the procrastinators, the ones that get a kick up the arse when they see their Mock results, the ones who perform well on the day, that will end up in trouble.

While I believe this is definitely a better way to assess students’ progress, the time to introduce it was not now. The season had already begun and everyone knew the rules when they started. For those that start playing later in the season, it’s going to be a disaster.

If this year’s Premier League was decided on predictive grades, according to some of the experts, Sheffield United would fall to a very average 9th place. Other models put them anywhere up to 7th which is grand. The most mathematical model does just that. However, down the other end of the table is what matters. When the season stopped, three clubs were tied for 18th place (one of the relegation places) – Bournemouth, Watford and West Ham. The predicted tables have condemned Bournemouth to the relegation zone. As a Sheffield United fan, still scarred by the Tevez affair, that’s not the club I want to see in the bottom three from those options.

Today the media are focusing on all the reasons why this change could have all sorts of problems from teacher bias (I’d relegate West Ham) to parental pressure on schools to potential legal action if a student’s predicted results weren’t enough for the course they wanted. In my opinion, once you set the rules of a game, you can’t just change them without it being fair to everyone. The Leaving Cert is a cruel game – it always has – and it definitely needs to be reviewed. However, this is not the time to do it.

The exams could be held on July 29th. There’s always a way of doing things. Primary schools and community halls could have been set up as exam centres. However, to use a couple of footballing clichés, at the end of the day, the ref’s decision is final. As a Sheffield United fan, I know more than others, it can be a cruel game. 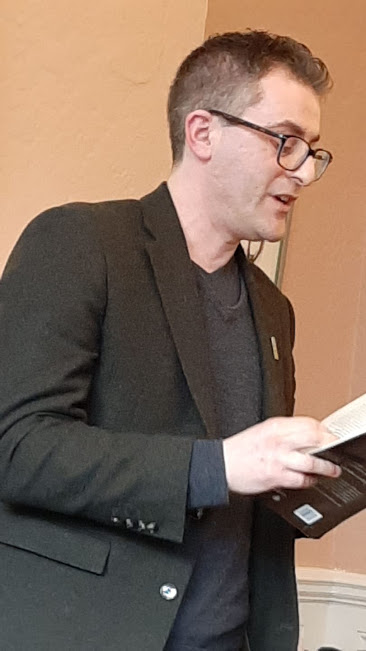 I was lucky to be asked to read at one of the Books Upstairs events this weekend. Sunday Sessions is an event where 3 writers are asked to perform their work in the café of the shop.

On the day Jewtown came out, I read here with Rita Ann Higgins and Michael J Whelan over 3 years ago. This week, I had Leo Cullen and Ben McGuire to read with. Ben’s dad, Brian, provided the music.

There was a packed room with over 60 people which added to the buzz of a very friendly atmosphere. I read from both Ah, Men! and Jewtown. 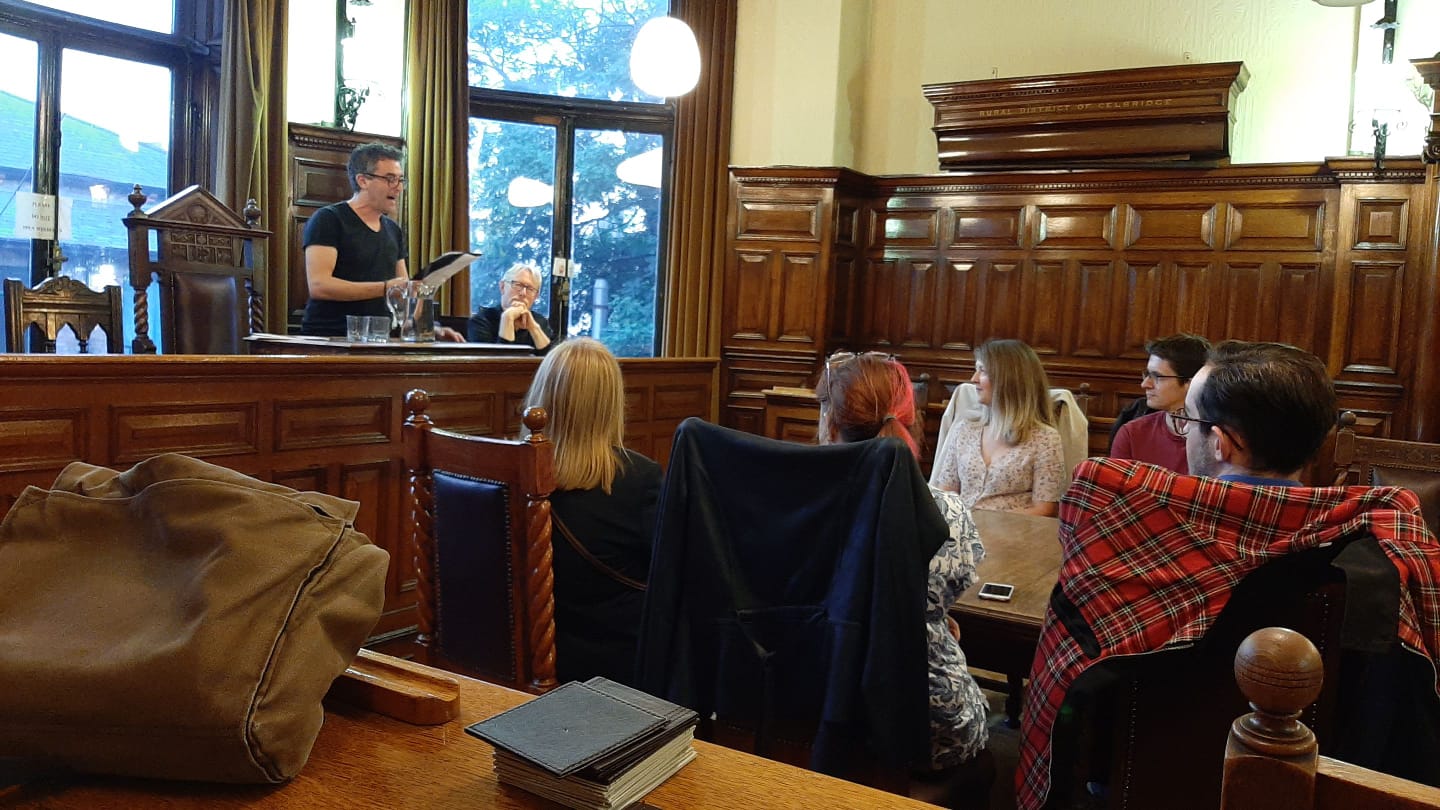 I had a great time reading at Culture Night in Poetry Ireland’s HQ. I read with Vincent Woods. Kerrie O’Brien was also due to read with us but, alas, she didn’t show. Hopefully she’s ok. I read 5 poems from my new collection, Ah Men! I think they went down ok.