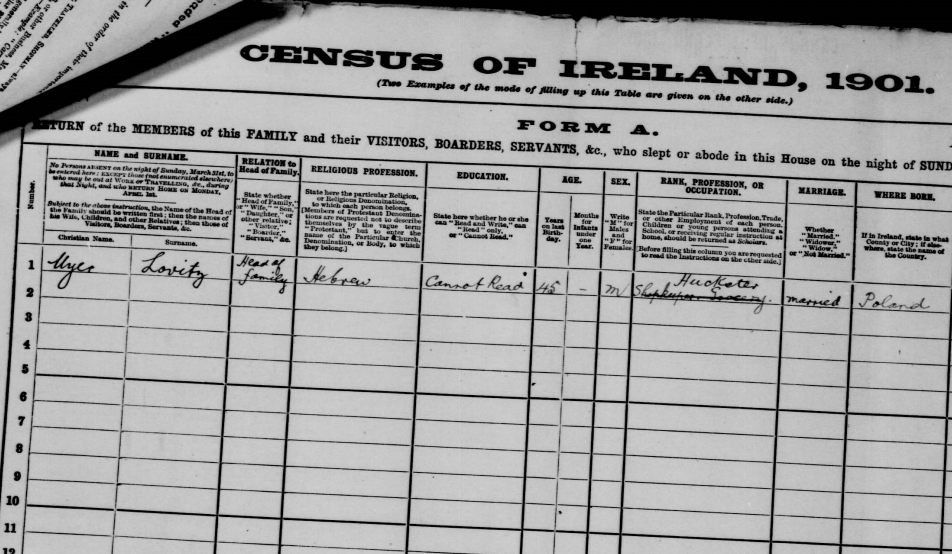 Most of my research into Jewtown came from the 1901 and 1911 census. While sparse, some of the information was fascinating to me and gave me a spark of an idea to write a poem to reimagine what life must have been like for the people living in the various houses. One man that jumped out to me was a guy called Myer Lovitz, who lived in number 88 Hibernian Buildings. While almost all the other houses contained families, borders, servants and so on, Myer lived alone. Also, while most of the other Jewish families in Jewtown were Russian, Myer was Polish.  The only other information I could gather from the records was the fact that Myer was illiterate.

I wonder why Myer Lovitz lived on his own and how he ended up in the middle of a predominantly Lithuanian neighbourhood. Perhaps, his family were away that night. I checked out the census records of 1901 for the name Lovitz in case there were others somewhere else in Ireland. Myer Lovitz, according to the census of 1901, was the only Lovitz in Ireland. I checked the 1911 census for the name Lovitz and there was nobody of that name.

In my poem, I reimagine Myer as a man who has left his wife and young child in Poland. I imagine that his Russian neighbour doesn’t know his story and simply believes he is lucky to be living on his own with no responsibilities.

I’ve searched various databases to see if I can find Myer Lovitz anywhere and the closest possibility is the name Myer Lovitt, who appears in a number of American records. Perhaps, Myer stopped off in Ireland on the way to America?