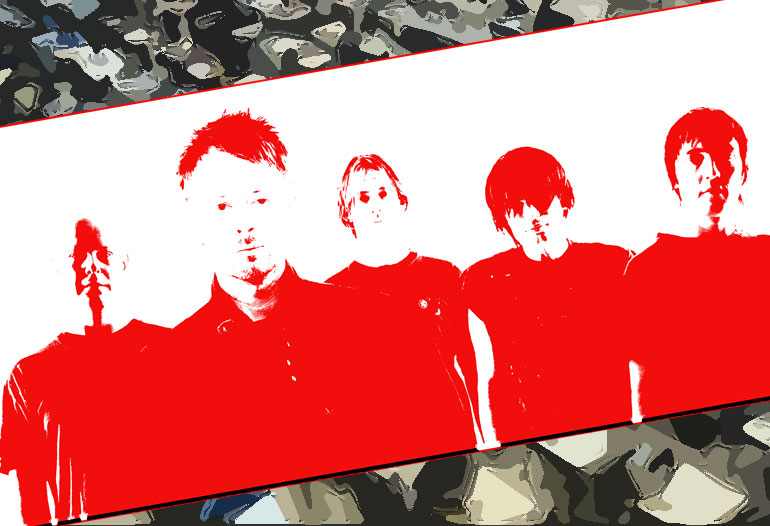 My blog is usually dedicated to poetry in the written and, maybe, spoken form but now that Bob Dylan has won the Nobel Prize for Literature, I’ll divert just once to the poetry of Radiohead. A few weeks ago, it was announced that they were to play a concert on 20th June 2017. It brought me back 20 years to 1997, my Leaving Cert year. Radiohead were playing the RDS on the 21st June. I had seen them less than a year before in Galway but I really wanted to go. Before I even saw the timetable, I already knew that my last subject, Hebrew, would be taking place after the gig. To further inconvenience me, there was also a Jewish festival, Shavuot, happening around the first couple of days of the Leaving Cert, which meant that all Jewish students were requested to sit a separate English and Maths examination near the end of the Leaving Cert timetable.

When I think about it, my parents were fairly liberal in their parenting style, or perhaps, it might be more accurate to describe it as potentially spoiling me. I was, like most first born sons, very close to my mother, and confided in her in many issues, many of which, in hindsight, I probably should have kept to myself. However, we had many discussions about religion. My mum was a devout Jew and kept almost all the laws. For example, we had separate cutlery for milk and meat meals and we never mixed the two. We went to synagogue every Friday night, no questions asked. Before we went, my mum lit the Sabbath candles in the house and we did Kiddush as a family. When I stopped believing in a god, I know it was difficult for her. From the age of 14, we’d have blazing rows, neither of us able to understand each other’s point of view. I suppose it was natural that both of us would soften our views towards each other and by the age of 17, she relented that I would only have to attend synagogue if I hadn’t something else on!

When I suggested that I was not going to do the separate Leaving Cert exams and intended to sit the English and Maths papers on Shavuot, I remember being surprised that both my parents supported me. In a way, I think they were happy that I was able to express myself and stand up for what I believed, (or didn’t, in this case.) I was also lucky that the principal of the school also supported my view, or at least didn’t stand in my way, despite the fact that I may have been compromising the argument that was being made for my Jewish classmates to sit the separate exam, though I don’t believe this was likely.

I probably was pushing it then when I saw Radiohead were to play the RDS a few days before my Hebrew Studies exam, the final exam of my Leaving Certificate. Hebrew Studies was compulsory for Jewish students in my school at the time and I hadn’t found my voice in time for 6th year to object to studying it. Besides, the other option was Classical Studies, and while my adult self would love to have studied this course, at that time, Hebrew was the better option, and having studied it since Junior Infants, I had a better grasp of the Bible than I did of Greek and Roman gods.

I hated the subject and did the bare minimum I could to pass it. It was a funny course, written by a priest, and one section of the course focussed on the Messiah and the belief that the Old Testament predicted the coming of Jesus. It was one of the questions in one of the sections of the exam but we, being Jewish, never studied it. It was doubly weird because no other students in the country did the Jewish Studies course, so the question was never answered. My final act of rebellion was to answer the question and spoof my way through what I believed Christians believed. Given my only knowledge of Christians was that they believed Jesus was the Messiah, they went to church and ate pork, it was a high risk strategy, but I really didn’t care, so disgruntled and apathetic towards the Leaving Cert and everything it stood for.

Despite knowing that I was probably on the verge of failing Hebrew, my parents allowed me go to Radiohead. I haven’t quite figured out whether this was because they knew it probably didn’t matter or whether they knew they weren’t going to be able to stop me. Whatever the reason, I am thankful.

I have just bought two tickets to see Radiohead on the 20th June 2017. It will be exactly 20 years (less a day) since I saw them in the RDS in the middle of my Leaving Cert, the 21st June 1997. I don’t remember much about the concert except that I was there and I loved it. I remember it rained through most of it and I remember it stopped in the middle of Paranoid Android, but I could be remembering incorrectly. To be honest, I had to use Google to remember the date and I feel very old knowing that it’s been 20 years since then.

My mother died exactly 3 years after that concert. I didn’t make a link and I won’t do so now. However, I’d like to think she would be happy with how her decisions in 1997 turned out.