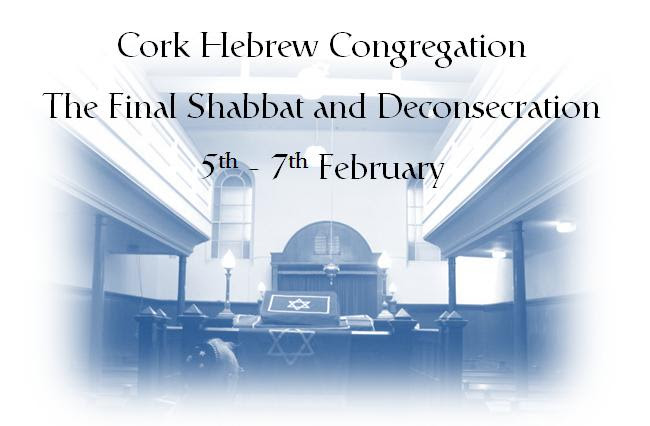 I received the sad news that the last remaining synagogue in Cork is to close its doors for the last time on the 7th February. South Terrace features in some of the poems in Jewtown.

The synagogue was built at number 10 South Terrace in 1896 when the growing Jewish community of Cork needed a bigger premises for prayer services. After the Second World War, the community gradually declined where today there are probably less than five Jewish families in the city. Up until recently, services were held every few weeks and for the High Holy Days, the synagogue was alive with Jewish people from around Munster and beyond.

However, the writing has been on the wall for quite some time and as Thomas McCarthy, the well-known Irish poet, said in his poem, The Dying Synagogue at South Terrace, “more than time has abandoned this” – emigration, assimilation and secularisation have sounded the death knell. McCarthy wrote this poem in 1987 and it’s probably a minor miracle that it’s lasted close to thirty years later.

I will be travelling down for its final prayer service on the Sabbath beforehand. Before writing Jewtown, I had little knowledge of the Jewish community in Cork except that I had a small ancestral tie. I have found it incredible the fondness people have shown to this tiny community when I have read some of my poems in Cork over the last few years. It is also amazing to see that the influence of the community still lives on with shops like Marcus’ Picture Framers and Sless’ Furniture still around, and then there’s Shalom Park and the Trinity Bridge, better known to Cork people as “The Passover” as it was opened by the well-known Jewish mayor, Gerald Goldberg.

In the words of Thomas McCarthy, for the community… To have been through everything, to have suffered everything and left a peeling door.